Air Travel was exciting in the 1930’s. Aircraft were exciting too, flimsy structures consisting of canvas stretched over wooden frames, held aloft by two parallel pairs of wings rigged with taught wiring. They attracted thousands of spectators at the frequent air displays that were all the rage during the period between the two World Wars.

During the same era the islands of Scotland were still remote to the vast majority of the Scottish population. The fishermen who fished the waters surrounding them were hardy seafarers who regularly risked their lives as they battled their small boats against the implacable elements.

Combine the thrill of the air and those brave young men who defied gravity with the wild temperament of the Atlantic and the hardy mariners who sought to tame it. Add a life in danger, bring these two rugged types together and you have all the ingredients for some nail biting adventure. Yet that dramatic combination passed almost without notice when they resulted in Scotland’s first Air Ambulance flight on 14th May 1933 from Islay to Renfrew.

In 1934 an agreement was reached with Orkney County Council for the provision of medical airlifts to Balfour Hospital in Kirkwall and to Aberdeen for more serious cases. 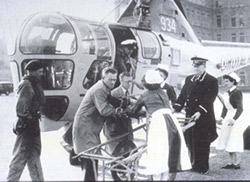 In Aberdeen, Eric Gandar Gower built his airfield, literally with his own hands and formed Aberdeen Airways, which performed its first air ambulance on 2nd February 1936 to South Ronaldsay.

The first regular helicopter to be introduced by the Search & Rescue (SAR) services was the Westland Dragonfly Sikorsky HR.3 which was based at RNAS Lossiemouth in 1952. On 2nd July 1956, one of these created a stir in Aberdeen when it made the first helicopter landing in the grounds of the Royal Infirmary. Its patient was a badly injured youth, 15 year-old Wilhelm Frederic Jansen, who had been plucked from an East German trawler Gerhardt Zimmermann, 90 miles out in the North Sea off Fraserburgh.

The Dragonfly had lowered Surgeon-Lieutenant J Laine to the fishing vessel where he treated Jansen who was then hoisted up by the hovering helicopter in a wicker stretcher. Jansen’s arm had been trapped in the trawler’s winch and had to be amputated in Aberdeen Royal Infirmary that night but the rescue operation had saved his life. Because of the limitations in range and capacity of the Dragonfly, a second machine accompanied it, with additional fuel, to Rosehearty.

There the tanks of the first machine were replenished before it set out across the North Sea. And there was no room for Laine on the return journey. He eventually made it back to Aberdeen the following day aboard the Gerhardt Zimmermann.